UPDATE: A MAN has been charged after a violent brawl erupted outside Pacific Pines State High School on Tuesday afternoon.

Police were called to the school around 3pm after initial reports suggest a man armed with a bat had entered the school grounds.

When they arrived, they found two large groups of students.

Teachers also got caught up in the brawl as they tried to intervene.

Thankfully, nobody was seriously injured.

A 17-year-old was treated by paramedics for a wrist injury.

A 16-year-old boy and a 29-year-old man, believed to be his older brother were taken into custody at the scene.

The 16-year-old boy was later released with a caution.

A 29-year-old man from Coomera has been charged with one count each of going armed so as to cause fear, possession of a knife in a public place and driving whilst under the influence.

He is due to appear in Southport Magistrates Court on November 3.

EARLIER: TWO people have been arrested following a violent brawl outside a high school on the Gold Coast this afternoon.

Footage captured by the Nine News chopper shows the arrest of a male, who is believed to have been involved in the wild brawl outside Pacific Pines High school around 3.00pm this afternoon.

The violent incident is believed to have occurred at a bus stop, with reports a metal wrench  was used in the attack.

One person, believed to be armed, remains on the run.

He was last seen heading into bushland, with residents warned to remain vigilant.

A teacher is also believed to have been injured in the incident and a 17 year old was taken to hospital with a wrist injury. 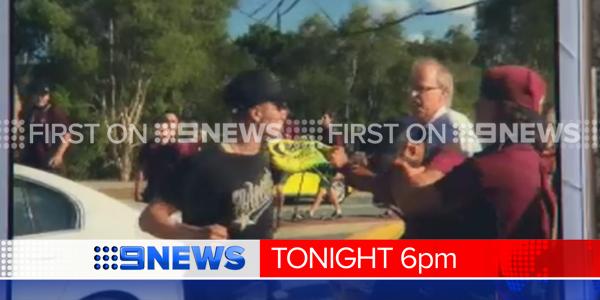 Reports a teacher was injured in a violent brawl outside Pacific Pines High School. pic.twitter.com/Yd8fStojRV